Buy 2 or more items and save up to another 20% instantly!

*Discount applies to all products storewide, you can buy different items and still enjoy the extra savings.

All orders are entitled for FREE shipping without minimum purchase.

Average Delivery Time: Read more about our Shipping & Delivery.
Join our rewards program and start earning rewards points. You can use the points earned to redeem discount codes in order to maximize savings for your future purchase.

Never be without weather updates or light with the Emergency Hand Crank Solar Powered Radio. It’s a reading light, flashlight, and weather radio in one. It runs off four power sources including solar power and a hand crank. It also has an SOS mode if you require emergency assistance. In the event of a power outage due to bad weather, you can’t check your phone for weather alerts if it’s dead. The Emergency Solar Powered Radio has a built-in 2000mAH power bank, so you can charge your phone. If you want to be prepared for any natural disaster or emergency, you need this radio.

With this weather radio, you have three main ways to power your radio: AAA batteries, USB charging, or solar-power. In the event all of these fail, you can hand crank the radio to build a charge. If you are stranded, flip the radio to SOS mode. It gives off a shrill alarm and flashing white light. This radio isn’t just for emergencies. It’s also a flashlight and reading light which makes it ideal for camping and other outdoor excursions. does the job, all good, radio gets very loud too

It was delivered fairly quickly and was definitely well packed. It's about the size of a thick gentleman's flask and very light weight. The sound quality is decent. I personally like the 4 different power options of battery, solar, hand crank or usb charging. Definitely a good buy.

The goods came, 3 shipped, 17 was delivered. Description corresponds, though I do not know about the solar panel. A large flashlight works in two modes, light and bright. The phone can be charged if the radio does not work (tried on my smartphone, as for the push-buttons, I do not know yet). 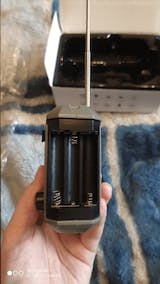 Solar powered, hand crank, and battery powered. This little emergency radio is an excellent addition to my emergency kit. I love it’s compact size. I put it in the sun for a few hours and it was charged up. The siren is also surprisingly loud. I already personally recommended this to my family and friends. I am very pleased with this item.

Very pleased with radio.Will use for emergency/off grid. Found my local weather band and am/fm stations easily.Went through all the function and preform well. Manual states on full charge will deliver 9-10 hrs radio / 15-17 hours on flash light. The manual said radio hours may vary depending on the volume of sound used. Weight is very light at only about 1/2 pound. Size is compact at about 5 in. X 2 in. X 2 1/4 in. I was very surprised on quality and could hear weather report clearly on high at about 20 feet away. Charged my phone by plugging in my charger cord from radio. Good for emergency power if needed. Will keep one in truck and in my outing gear. Only wished it would charge from type "C" and not micro usb is about the only negative I have with radio. Manual states it takes about 3 1/2 hrs to fully charge and it took a lil over 4 hrs when I did it. Solar showed charging when placed even in very little light. In manual it states solar charging is difficult for full charging but for battery maintaining. Manual states solar panel life is 25 years when used 6 hrs. per day. Might need a new one in my lifetime lol. Hand crank is easy to turn and showed charging while I was winding. Manual says 3-5 mins for intial use and wind 130 - 150 rpm for power to be generated. Says 7 hrs. Winding for full charge lol. Good news is 1 min winding 3-5 mins of radio and 45 - 60 mins of light. So there's that. A good price and it is a no brainier to have one or even 2 on hand (truck, home, cabin, camping/hiking, boat ect.) Hope this review helps.

I originally bought this for camping since it is small, has a weather band, and has solar and hand crank charging capabilities.I've seen reviews that are critical of the sound quality. Considering it has a 1-in speaker it's as good as you can hope for; that is, the music is tolerable, tiny but tolerable. Voice quality, for example on weather radio, is very usable. It does maintain a charge sitting inside on a window sill (which admittedly reduces the amount of power the sunlight can deliver after being partially reflected and also filtered by the window glass.)The hand crank works about as described. You have to figure out how to hold it: hold the radio in your left hand and keep your fingers on the edges, then turn the crank with your right hand. It is more work than you might think to get a significant charge, but it's a usable system if you had a dead battery and were out in the boonies needing to get a weather report.The flashlight is phenomenal. I ended up using it on a fairly regular basis simply as a flashlight. I keep it on the windowsill near the back door, and it's easy to operate in the dark. It has a very bright beam which is more than enough for walking in the country with no lights around. It also shoots a pretty good beam about a hundred yards, which is handy for spotting critters out in the gloom.Up until last month, it did a fine job of being a regular flashlight and occasional weather radio. With no warning, it bricked; it didn't get dropped and the battery didn't appear to decline. It just refused to turn on or accept a charge. Since it was slightly out of the warranty. I decided to take it apart and look for trouble. There were no obvious problems with the circuit board or wires. The battery was somewhat swollen, however.There is a lot of electronic circuitry packed in a small case! Typically, a dead battery still has a volt or at least a few millivolts left. This one had absolutely nothing. One time the radio got left on at inaudible low volume and ran the battery down. Perhaps this happened again and drove the battery into deep discharge. The mystery is that it wouldn't show a charge plugged into the USB, or with the crank, or in sunlight.I thought I would ask customer support if they had any notion whether it might be a cracked circuit board or maybe some kind of protective circuitry with the battery that would prevent the charge light from coming on if the battery was in deep discharge. To my surprise, they asked if I would send them a video of what the radio was or wasn't doing. They said they would probably replace it. I was surprised since they could have simply dismissed it. Instead, they very politely asked for proof of purchase, a video, and my shipping address. A replacement arrived in 3 days!Once again, I'm a happy camper, literally! I am blown away by how prompt, helpful and supportive they were.This radio fulfills its purpose with flying colors (with the caveat that its small battery is not going to do a whole lot to charge a dead cell phone). In an emergency, with some patient cranking, it could charge a cell phone sufficiently to get help. It's a great emergency and camping radio as well as a very usable flashlight. The customer service is as good as you can find anywhere.I was not paid for this review in any way other than by the company providing a good product along with excellent customer support. 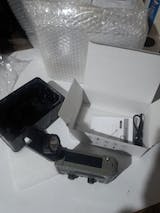